Why visiting the BEARS 2018 was hard, but totally worth it!

Never heard of the BEARS? What if I give you a hint: Berkeley. Getting closer? Yes, the football (Be careful, I didn’t say soccer, but football.) team from Berkeley is called the BEARS.

This post could have been a summary of a nice football game we watched at Berkley, ending with a razor thin margin victory from the BEARS, but it isn’t.

For our class of International Innovation Management (IIM), the abbreviation BEARS stood for Berkeley EECS Annual Research Symposium. It sounds a lot less sexy, but it was a better experience for most of us. Now that you know that Americans love to encapsulate abbreviations, I can also tell you that EECS stands for Department of Electrical Engineering and Computer Science.

I know that by now my fancy scientific words have probably scared 90% of the readers of this page expecting a football game report, but stay with me because the BEARS was a great insight into the research of one of the world’s most productive and best-known research facility.

This year’s topic was: “More Than Moore: Is this the end of Moore’s Law?” As most of you probably don’t know much about Moore’s Law, I encourage you to take three minutes to read this short summary. https://en.wikipedia.org/wiki/Moore%27s_law

After an introduction by the chairman of EECS, Prof. James Demmel, some prices were given to a couple meriting faculty members. This was the perfect introduction before jumping into the core subject.

The first talk was called: “The Third Era of Scaling of Computing Technologies”. Prof. Sayeef Salahuddin explained us the three eras of scaling: Geometric scaling era (putting more transistors on a chip), effective scaling (improve the effectiveness of the chip), and now starting functional scaling (being more efficient by specializing the chip for the desired application). 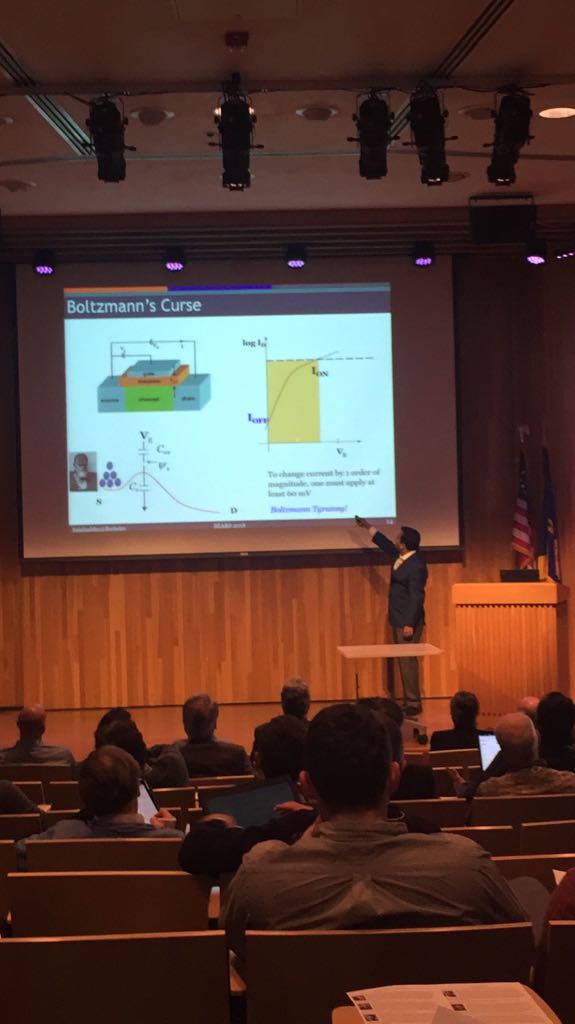 The second talk was called: “Reigniting innovation in the hardware industry.” Prof. Krste Asanovic convinced us that it was important to reduce the exponentially rising chip development costs. The variable costs of a computer chips are so low, and the fixed costs so high, that it is more and more important to focus the efforts on the development costs. This conclusion is also reached when you think that the industry leans toward specialized chips instead of generic ones.

The end of this talk marked the midway point of the morning, and just as 90% of my readers already left this blogpost, 90% of the class was busy consulting their phone or sleeping. Computer science sometimes really is a boring topic. ^^

The third talk was called: “More than Moore with Integrated Silicon-Photonics.” Prof. Vladimir Stojanovic described the current efforts to insert Silicon Photonics on regular CMOS (https://en.wikipedia.org/wiki/CMOS) chips. This means being able to insert a functional network of optic network during the chip production process. This allows a faster communication between the different part of the chip.

The last talk was called: “Injecting Agile into Analog Design” Prof. Elad Alon talked to us about his efforts to facilitate the design of analog chips. This is a very hard task, needing a lot of know-how, and Prof. Alon is trying to automatize the process in some way.

Overall, it was an amazing experience to be able to see the results of top end research in a specific field. Sadly, many of us didn’t have the required level to understand most of the talks, but that doesn’t matter too much. After a visit of different laboratories, we wrapped the day up by visiting the library and the clock tower and buying some Berkeley goodies before returning to the other side of the SF-Bay!