The Mission district, a bit less glamourous than the downtown district, but in the same time as well animated and in a way «more real» than many façades here in SF. In the heart of the Mission district a place for hackers exists – and this place is open for everyone. 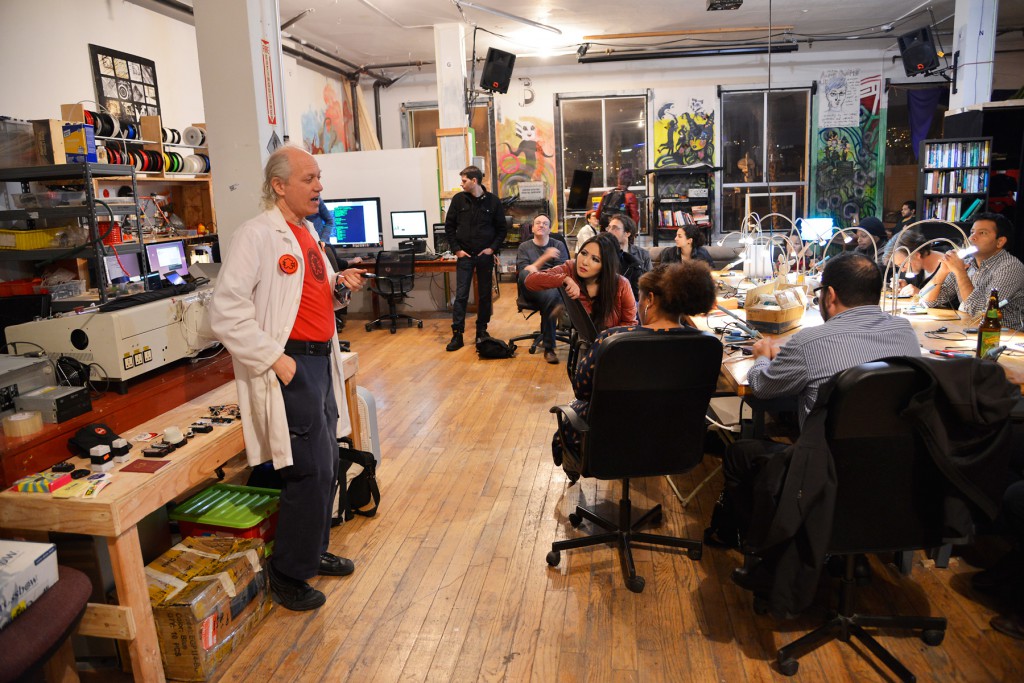 The professor on the image? (Not sure if he really has the title or if he just looks like the professor of «Back to the future»…) His name is Mitch Altman. He’s the right person at the right place. And he’s totally credible with every word he says. It’s not only informative but also quite humorous what he was telling to the people who visited the tonights workshop at noisebridge. He is living his passion by creating and hacking simple electronical devices and even more when teaching people how to do things (…you need person who helps you to quit your boring job? Ask him.) – 45000 people learned how to soulder from him.
The place itself seems to be a creative space. Computers, books, tables, gadgets; everything unaligned, everything seems improvised. And exactely this chaos may help to be more flexible in eachone’s thoughts.  And maybe also the only idea which Mitch transformed into a real business was created in this kind of open space zone. He created a remote control with the functionality to switch of any TV without defining it each time individually. The remote control just works at nearly every TV. So he used it to switch of TVs in public!
He’s not the kind of person who keeps things as a secret. Nearly every plan and a lot of his knowledge are available on Open Source platforms. This philosophy also fits with the image of this personality we got to know.

Learning how to do things 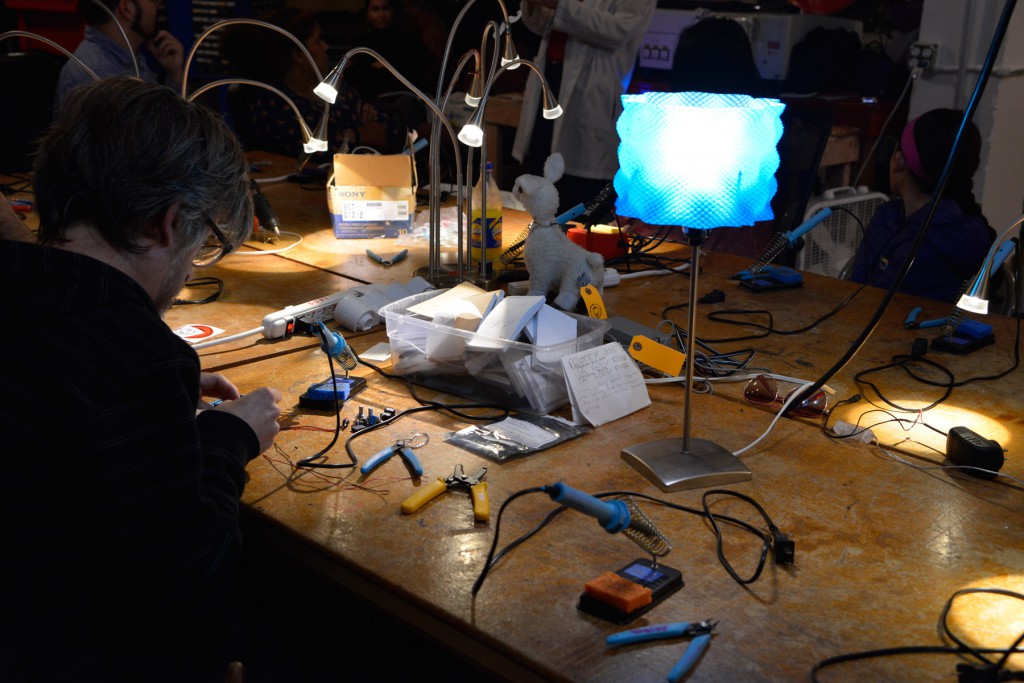 A biomechanical engineer was part of the group doing a workshop this evening. A young entrepreneur, originally from Texas, doing her second Master degree in Copenhagen and actually also looking for business partners to develop her own business with: intelligent clothes. Therefor she is doing a lot of networking already for a while to find the best partners.

To know a little bit more how it could be done, and to be able to create simple prototypes herself, she did the workshop to get precious tips (I’am sure they were) from Mitch. So soon she may have a finished, good looking and reliable prototype of her first product: a temperature sensitive sock which can send an alarm signal when foot temperature changes too quickly (often the case for diabetes patients as a alarm signal)

Unfortunately, as the day for us – the IIM team – was long and intensive, there was no time left to participe ourself at the workshop. But …

For sure, facinated by Arduino-like kits for a while, it was clear that I could not go home without a little kit to built something nice. Fortunately the tv-b-gone gadget does not only exist as a «fully equipped» version but also as a Do-It-Yourself-Kit. Well, there is actually no soldering iron at home, but the purchase of this $20 puzzle is a good reason to finally get one – I think it will not be the last electronical workpiece.

But yeah, let’s start small. And when my own Switch-Off-TV remote control will be finisched. I’ll have a look again at the arduino website…

If you want to know more about …

Check out the website of www.noisebridge.net. Well, the website isn’t as appealing as the workspace of noisebridge was. So there is only one right thing to do: go and visit it once in real! Also Mitch Altman highly recommended it! So where can you find it? Go to 2169 Mission St, San Francisco, go up the stairs and you’ll be there!

And for all of you, who would like to stard soldering: There is this famous comic from Mitch Altman, named «Soldering is easy» – because it is easy, he told the participants. As it is a piece of knowledge from which the public can benefit, also this document is freely available because it is shared under the Creative Commons Licence BY-SA. Download the comic here: Full Solder Comic