CA Technologies is not very known by the public. You might think that it’s only one of many companies in the Silicon Valley that succeeded in software technologies. It is, however, one of the largest independent software corporations in the world ! They  have more than 12’000 employees worldwide. Their clients are mainly american companies, that is perhaps the reason that CA only rings a bell but nothing more.

We were very luck to be able to visit the CA building, and furthermore, participate in the conferences that were organized for us that day.

We arrived, all fourteen of us, in the conference room at the top floor of the building. On the desk, our name tags with a pen and a notebook were waiting for us. Also, not sure if that was the reason, but we had to leave very early that morning and a huge breakfast with coffee was ready for us to eat. And it was awesome. 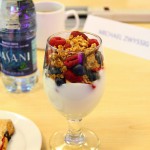 That day we had a total of 4 presentations about Innovation  given by very interesting people.

The first one was an introduction by Jacob Lamm (executive vice-president of strategy and corporate development) about incubating a business, talking about the Innovator’s dilemna (Clayton Christensen) and also explained what the words disruption and pivot really meant.

The second presentation, given by Leonid Igolnik (vice-president of engineering), was about the different types of innovation, and he’s also the person who introduced us to the purple cow and Otaku concepts, which is basically what explains the success of some companies just because they have a product that is presented in an special way. He then explained what the SUCCESs model was.

The third presentation was about product management, presented by Ankur Agarwal (Sr Director, DevOps and Cloud Management). We learned about identifying differents markets for the product to be sold,  joint development to minimize risk, MVP (Minimum Viable product), and also about an interesting article by Ben Horowitz named Good VS Bad product manager.

To finish the day, we had an introduction about the lean startup concept, which is one of the biggest aspects we learned about in those two weeks in San Francisco. We figured out that in the Silicon Valley, the most important thing is to try, because you may succeed only if you do so. That’s why, in the american terminology, you don’t fail, you actually pivot. An interesting concept given by this presentation was the 3P concept : Persevere, pivot or perish. And if you fail, fail fast. Don’t spend too much time or money.

We also learned about intrapreneurship, which is was was missing from the big companies before. These companies are so big that it’s really hard for them to innovate in a disruptive way, because they have too much pressure from the stakeholders. This concept allows them to create internal startups with a fixed amount of money (at first), to see if an idea could be transformed into a real life product. These companies sometimes even partner up with competition to minimize the risk.

We left CA with our heads full of new information, and went to the Intel Museum, which was a few hundred meters from there.