InthisTuesday 17th of February we had the luck to receive Craig Newmark in the Swissnex. He is the founder of Craiglist, the main local classified website in the USA. The website is one of the most seen in the world. It receives more than 50 billion views per month. That’s represent more than 60 million of users and 80 million of classifieds adds each month in the USA and even more around the world. He came to tell us the story of Craigslist and to talk about his current engagement.

Craig described himself as a nerd. He worked at IBM for 17 years as a web developer and move to Silicon Valley in 1993. story of Craigslist began in 1995. As a hobby he decided to launch a newsletter to inform people about the different event in the bay area. To collect enough e-mail addresses, he collected the visit card of the everybody he met. At the beginning, Craig was alone to share events, but quickly a lot of people began to use the platform. And the user started to call the newsletter “The Craig’s list”.

Craig was surprised to see that the purpose of the list has involve. Companies use it to look for new employees, especially developers. Craig decided to add a rubric for Jobs research. By the time others rubrics has been added. 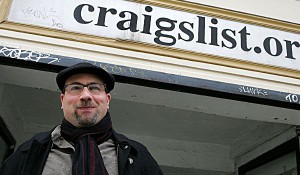 In 1997, Craig realized that the newsletter was not adapted any more. He created the website Craigslist.com. In the beginning of 1998 thelist was still a non-profit hobby for Craig. He hired two people to help him to develop the website. In 1999 the Craigslist become a for-profit company. In 2000 the company had 9 employees working in Craig’s flat in San Francisco. During the same year Craig realize that he was not a good CEO to run a business, so he hired Jim Buckmaster as CEO (still current CEO).

Later, Craigslist started to ask money two kind of ads. 25$ to post a jobs, 10$ for apartments. These prices are much lower than in any other way to advertise a job or an apartment. The business model surprised a lot of observatory, especially some Wall Street analysts like UBS. Maximizing the profit is not at all the goal the company. They are just using their revenues to cover the operating costs. They focus almost exclusively on maintaining and improving the website and on helping people to find their car, a flat or even a job. Craigslist is the perfect example of his founder philosophy. Using technology for the public good.

Today Craig is no-more involved in Craigslist.com. In 2011 he founded Craigconnects, his personal Web-based initiative to stand up for organizations “getting stuff done” in areas Craig is passionate about.  These include veterans and military families, open government, public diplomacy, back-to-basics journalism and fact-checking, consumer protection, and technology for the public good.

During this visit of Craig, we met a really interesting person. An innovator in the non-profit sector. He reminds us that making profit should not be the only goal of a company and that having a real impact on people life is as important as making profit. ¨