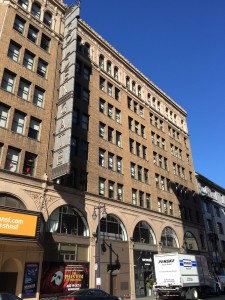 As the concluding post of this blog (at least for this academic year), I would like to tell the story about how my students have dealt with the challenge I gave them. The IIM San Francisco study trip was not only an opportunity to visit companies and universities in the Bay Area, but also an opportunity to do “something different” in a very different place.

I asked my students to form 3 groups of 4 people and figure out what could be a market need in San Francisco (and more generally in the Bay Area/California/United States) which could be fulfilled with a “Swiss-*” product. The “*” could have been anything related to Swissness, such as technology, branding, know-how, tradition, etc. 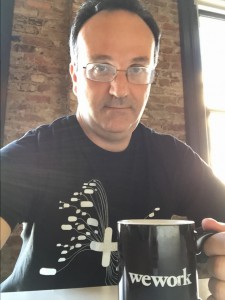 I gave them full freedom, except the fact that they need to “get out of the building” and talk to people in order to understand the real needs. They could choose the sector before hand, but they had to clean their mind from assumptions and be open to listen to what people needed. I also explained them that “need” means not only problems (pains), but also desires and aspirations (gains). They need to understand how people deal with those needs today and see if there is an opportunity to provide them additional value in exchange of a price for which a profit could be generated. Very simple, but at the same time, very challenging. 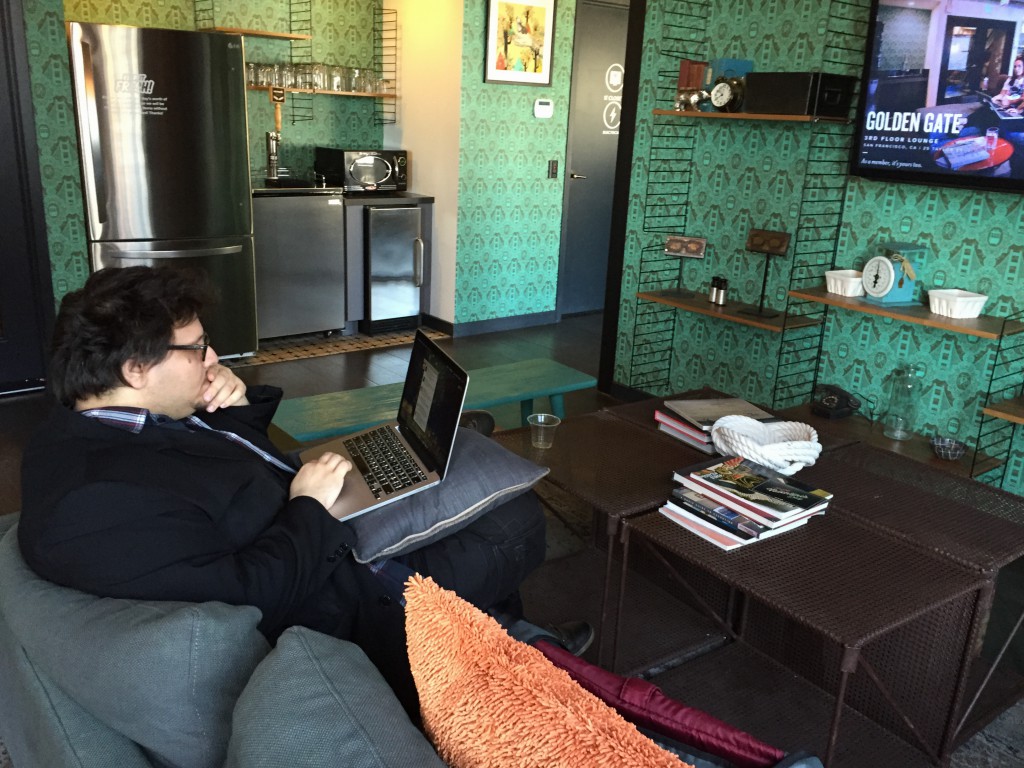 All that started on Monday 16th (the President’s Day) in the premises of WeWork Golden Gate co-working space in Taylor Street. After a briefing where I explained the terms of the challenge and formed the groups, the teams entered into some brainstorming sessions, before going outside and interviewing people.

I told them to try being very open-minded and never jump to the solutions. First, they need to understand the needs and assess both the level of urgency of that need and how many people had that feeling. I also explained that for disruptive innovation, the market size can be small at the beginning, but with a high probability to grow exponentially in the future. As explained by Peter Thiel, founder and CEO of PayPal (and with Swiss origins) in his book Zero to One, being able of “monopolizing” a small but exponentially growing market is key to big success, as it happened for PayPal or for YouTube. 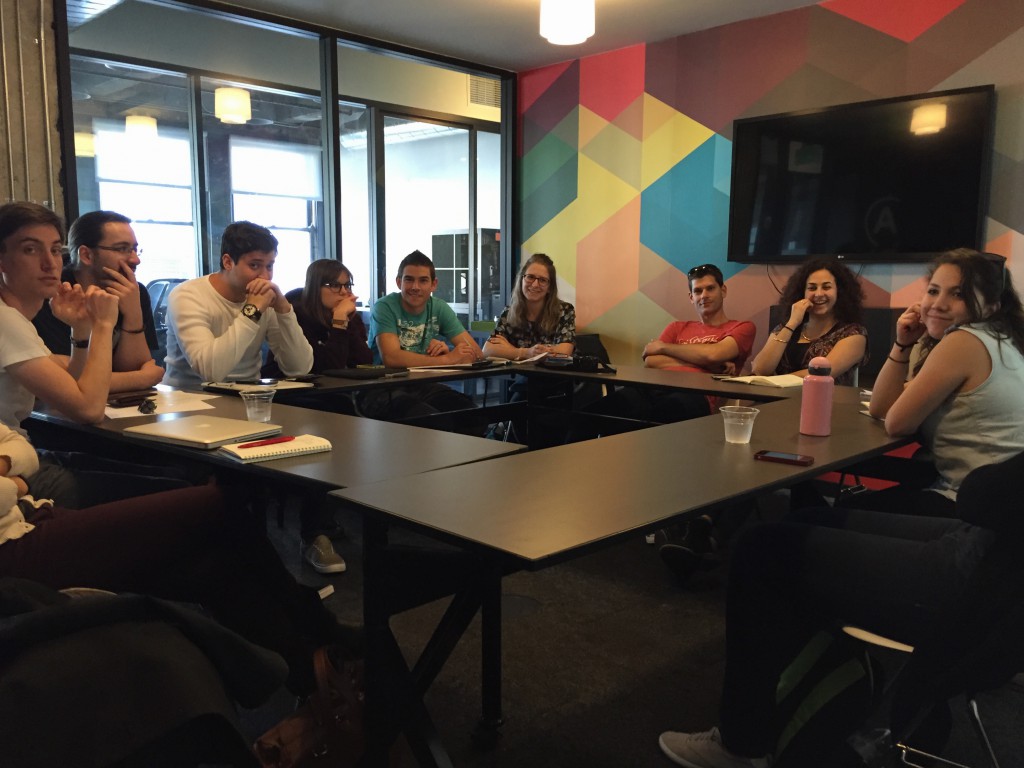 The three groups selected each 1-3 sectors to investigate and after 1 hour they were ready to start their first interviews. After few hours they came back to WeWork and debriefed the interviews. I noticed that they started with some assumptions and the interview showed that some of them were wrong, while they also discovered other opportunities that they had not considered before.

Back and forth from the street to the meeting room, a the end of the day, for almost all of them it was pretty clear on what to focus and put their creative effort to come up with a “Swiss” solution to a US need.

The brainstorming and interviews continued throughout the whole week and the group took the opportunity to discuss about their ideas with the people they met during the visits we organized, such as Y-Combinator, Singularity University CA Technologies, etc. 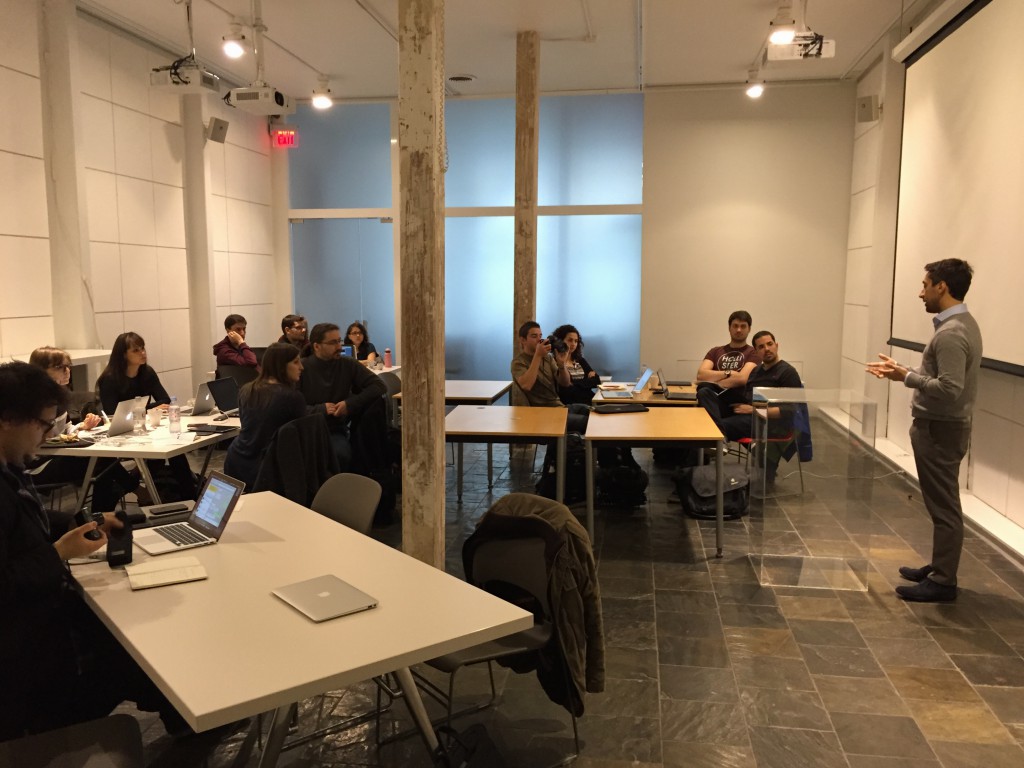 On Tuesday 19th, the 3 teams spent a whole day at Swissnex San Francisco premises, finalizing their market research for the presentations they had to present the morning after in front of a panel of experts of innovation and entrepreneurship. During this day, they also had the chance to talk of Francesco Simoneschi, an Italian entrepreneur and now managing partner at VC fund Mission & Market in San Francisco.

Francesco talked about his history as an entrepreneur from Europe to Silicon Valley and how he turned into an investor. He also explained what investors expects from startup founders and how different are the European and US investors landscapes. 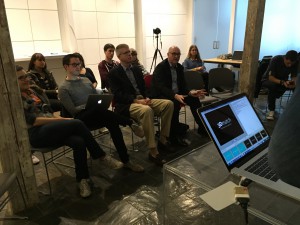 The panel of 5 experts

On Friday 20th, my students were ready to pitch! The panel of expert was made of 3 interns from Swissnex San Francisco, Peter Matthews head of research at CA Technologies and Greg Jorgensen a former VP of marketing at Verisign and now brand management consulting in Silicon Valley.

I explained to the panel that there would not be any winning team. They were supposed to provide feedback on the idea and and the way they have performed their market research and collected primary and secondary data. 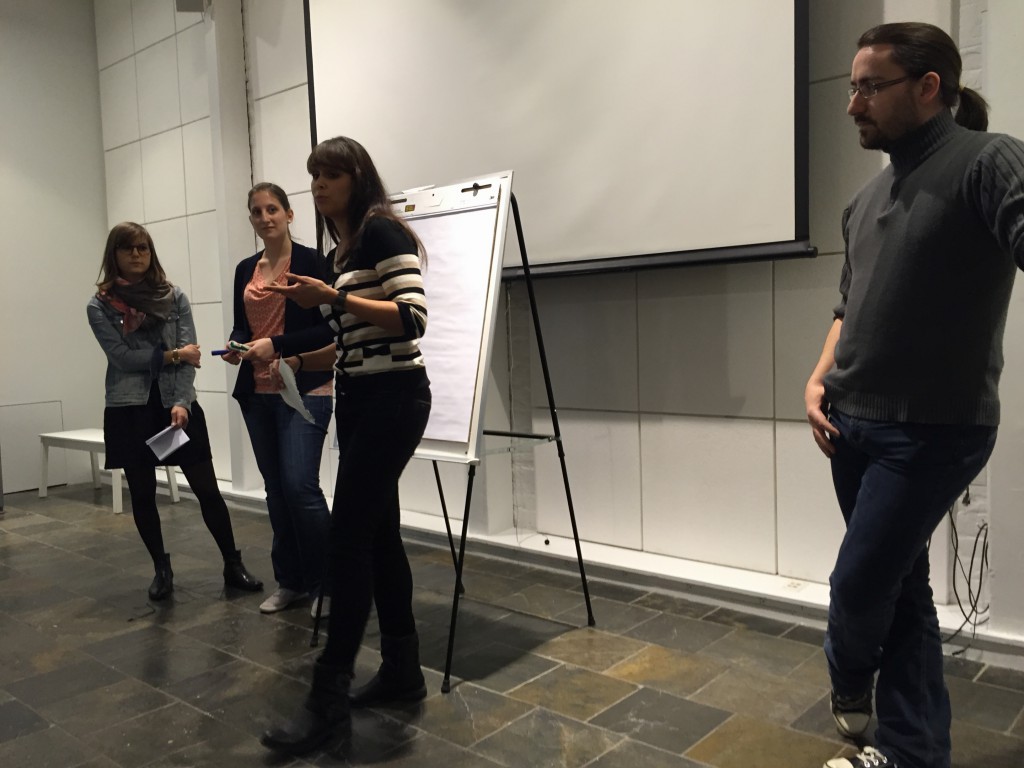 The first team, IdeaSpace, composed of Alizée, Nelsia, Auriana and Mathias O.  focused on a problem of startups, namely that of showcasing their products in order to get feedback from potential customers. I think that a good short description of their ideas could be a sort of “Physical KickStarter”, that is physical place, a showroom, where startups can demonstrate their latest products, get feedback and even sell the products to early adopters. I haven’t seen anything like this. The “Swissness” of the idea comes from the Swiss excellence in hospitality and specifically in the organization of great events such as the Geneva Motor Show, World Economic Forum in Davos, or the Montreux Jazz Festival. 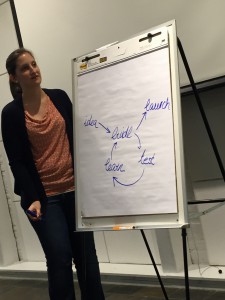 I was also impressed to see how well the value proposition was illustrated through the use of the Lean Startup validated learning loop. The team learned a fundamental aspect of product development: it is very rare that the first attempt in designing a product will be the right one. Perfection is obtained through iteration over a loop that includes customers in the first place. Only customers can tell when a product is good enough for their needs. And they usually tell you by buying your product! 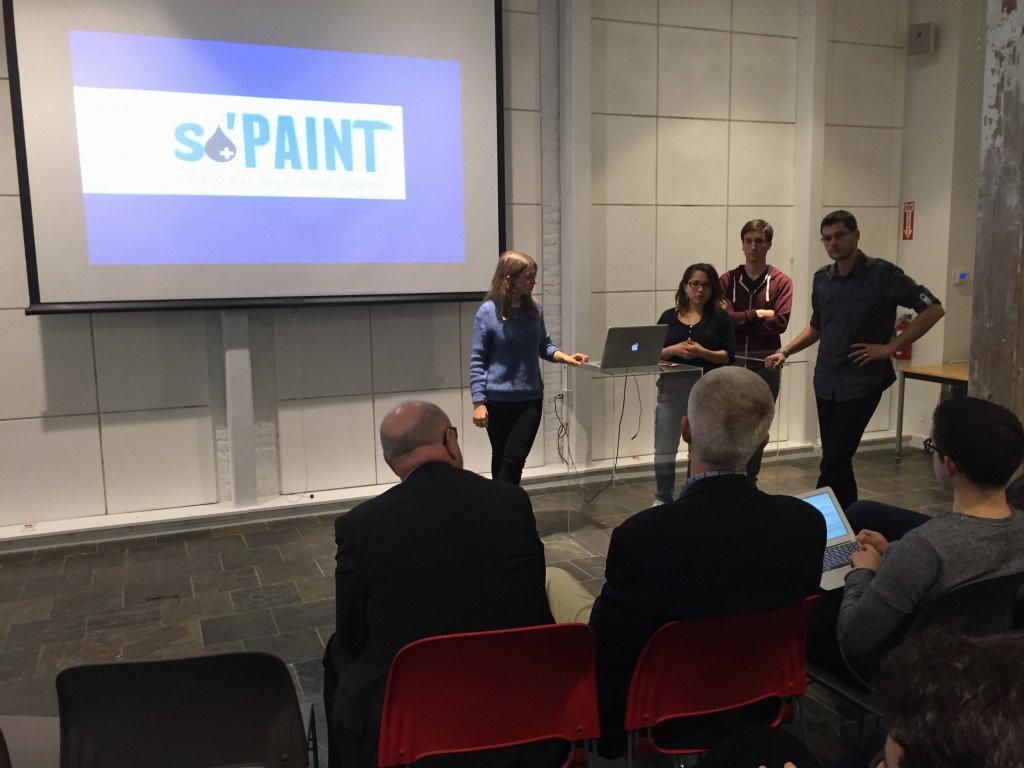 The second team, S-paint, composed of Camille, Veronica, Yohan and Florian, were more focused on technology. They chose a very interesting and somehow serious problem: drought in California. They figured out that absence of rain does not mean that there is no humidity. Humidity can be transformed into water by means of nano-technologies developed in Swiss research institution such as EPFL and ETHZ. These institutions are working on special painting material that can condensate vaporized water when spread over surfaces. When spread over  buildings, with a clever system of canalization, the condensed water can be collected into reservoirs and used for non-drinking purposes such as watering plants of flushing WCs. 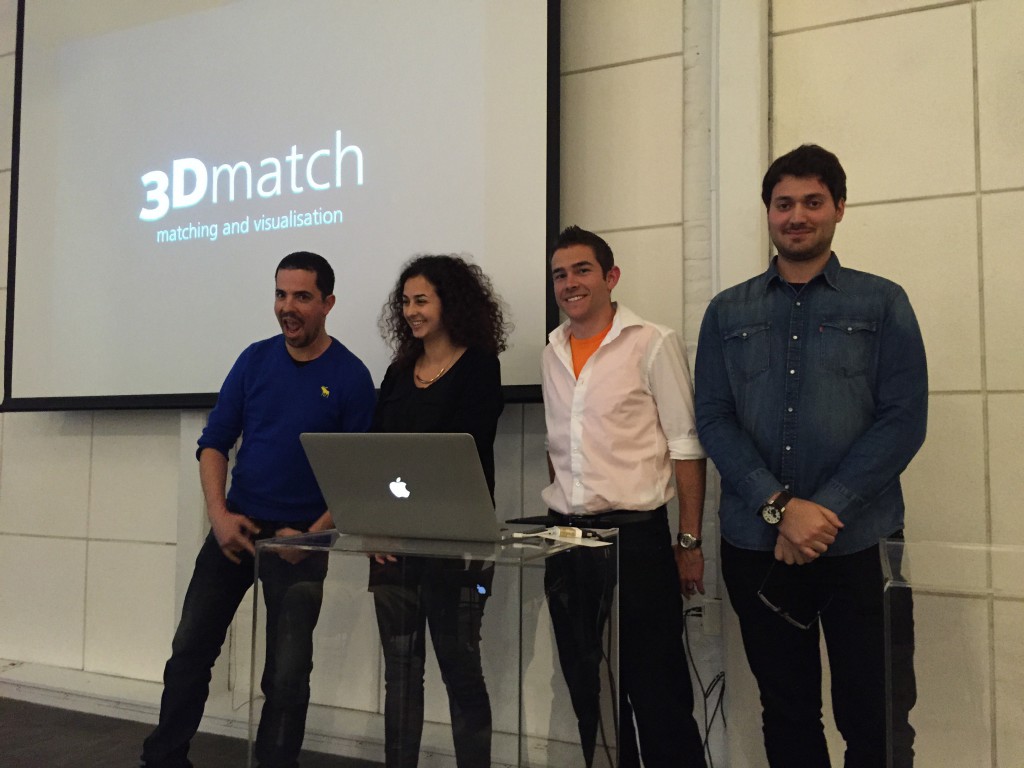 The third team, 3Dmatch, composed of Matthieu, Sabine, Christian and Matthias D. proposed a solution for online apparel shoppers who cannot use fitting rooms. Nowadays, e-commerce apparel companies have chosen a model where they send the cloth of the selected size, which is tried at home and sent back (at the company’s expenses) to the merchant in case of wrong size. This solution is quite expensive and this cost can be dramatically reduced by avoiding returns. Thanks to advanced 3D modeling technologies developed in Switzerland, they envisage a “plugin” to e-commerce website where the customers can mash up their own body’s 3D model with the clothes they want to buy. They can see how it fits on the screen of a device (smartphone, tablet, computer and even the TV screen). Moreover, in combination with a motion recognition device (i.e. Microsof kinect camera), they can also simulate a virtual mirror where they see themselves wearing the selected clothes.

The panel of experts was literally blown away by these ideas and their presentations. I am extremely proud of what my students have achieved in such a short time frame. They were under pressure and sometimes they worried of not being able to deliver a pitch of a sufficient quality. But they were wrong! They underestimated their potential, which was probably unleashed by a highly stimulating environment. I truly hope that this experience have influenced their mindset and I am sure that they realized how good and innovative they can be, if just they put the right amount of passion in what they do. That’s the key!