During our trip in San Francisco, we had the opportunity to visit the technology hub of the United States: The Silicon Valley. It is the home to many of the world’s biggest high-tech corporations, as well as thousands of startups. The questions that you may be wondering are: How does it all started? Why is the Silicon Valley as famous as it is nowadays?

Well, we have been told that the birthplace of the Silicon Valley may be the “HP Garage”. Indeed, In 1938 David and Lucile Packard got married and rented the first floor of the house at 367 Addison Avenue in Palo Alto. The picture below shows the garage. In 1989, the state of California named the garage “the Birthplace of Silicon Valley” and made it a California Historical Landmark.

Furthermore, Dave Packard and Bill decided to pursue their earlier plan of starting their own business. That’s when the name HP (vs. PH) was chosen by a coin toss. 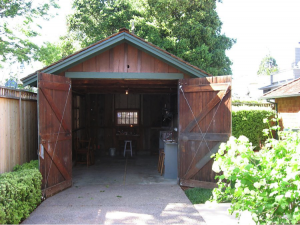 The development of Silicon Valley was possible essentially because of the synergy of companies and the so famous Stanford University. Still today companies and students from the university work together on researching new technologies as they do with Silicon (a raw material used for electronic components). When visiting Intel, we learned how they transformed silicon. Intel had several floors to transform this raw materiel and they insured that there was any dust to interfere in the transformation of the product.

That high concentration of small flourishing companies was possible because of their need of that component (silicon) to produce computer product – this is the era of informatics.

More globally, according to the Computer History museum we have been told that Silicon Valley had 5 major waves of innovation that make them became a rich innovation ecosystem: i) Defense (1950s-1978); ii) Integrated Systems (1979s-1986); iii) Computers (1985s-1995); iv) Internet (1995s-2005); v) Social Media (2005s-2013). Some of the companies of the previous waves still have their headquarter in there, even if some of them, like Hewlett Packard, had to rethink their activities and strategy.