Two of the most famous schools from United States are located near to San Francisco and we had the opportunity to visit them, the Universities of Stanford and Berkeley. They are places where students combine ideas, technology and innovation to make new prototype on things that we already have and that can be improved. 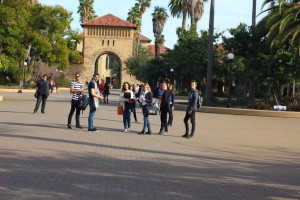 We have been able to visit the local of the Design School as well as the Engineering School.

One of the most interesting and exciting project that was there was surely the Gecko project where one of his workers is a student doing her PhD. This project is about a study on how Geckos are able to stick to a smooth surface with their feet and then be able to reproduce the phenomena with the tools and materials that they have.

By doing so, few improvements have been done. A significant example is that it will be possible for a robot that possesses this technology to push a load ten times its weights without slipping thanks to its surface adherence on the floor!

The ways that studies are done in Stanford are very different of the University in Switzerland. In fact, students are free to make the project that they want and have specific time to deliver the research.

We had also the chance to be given a tour by one of the student studying there in the Design department. She told us about the importance of the customer’s needs on a product. Before starting to make a prototype, it is necessary to ask the customer many questions regarding the design and the processing of the product. Avoiding direct question is primordial knowing that the customer usually doesn’t know himself what he really wants. 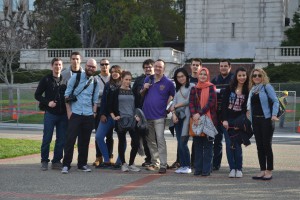 We had the opportunity to visit the campus of Berkeley which is quite different from our schools in Switzerland too. It is really alive, and events such as clubs or sport teams are highly valued and put in the front line.

In America, if your studies grades are low but you are an athlete, you will still be able to enter one of the best universities there. On our stay there, we attended two conferences. One of them was about important researcher who presented to us their works (we had the chance to see Mr. Steve Wozniak, the founder of Apple).

The other one was about an application that would help people with more efficiency after an earthquake but also to let them know where potential risk were.