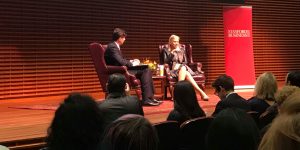 Ginni Rometty, IBM CEO since January 2012, spoke about many topics during the conference, such as which aspects we must take into consideration when looking for a position, how to build a long term relationship with stakeholders and IBM mindset regarding the use of artificial intelligence (AI).

Her key for an happy professional life

Ginni Rometty gave us her key for choosing a new position and/or a career path: be passionate about what you do – no matter the field you are working in – and do something with purpose as it will be important in the long run.
In addition to those, she mentioned building trust as the last key factor for a successful business.

How to build trust

Ms Rometty explained how IBM succeeded in building a long-term relationship with its stakeholders when working with AI and datas.
Giving purpose by working with technology and not replacing human being with it. Moreover, transparency is very important for people and giving them information about how datas are collected, by whom and explaining what they are used for will help the company build trust with its clients. Indeed explainability can help stakeholders to better understand the company’s vision and operating model.

The use of AI

In order to create value for customers, the results of datas analysis should be only for them and not going to their competitors. Therefore, using AI should help them identifying useful information among their own existing datas. Rometty considers IBM responsibility not only to develop new products but also to commercialize them “safely”.

WEF 2018 and the importance of skills

Ginni Rometty attended the 2018 World Economic Forum (WEF) in Davos, Switzerland, and took part in conferences related to the WEF System Initiatives about skills development, “Shaping the future of Education, Gender and Work”, a topic which really matters to her and is applied by IBM. Indeed gender and religion play no role for the company and developing employees’ skills is recognized as a necessity. Furthermore, Mrs Rometty insisted on inclusion as it plays a significant role in the workplace nowadays.

My point of view

I really enjoyed listening to her during this conference as she was witty, playful with the moderator and not self-centered. She presented her experience working for IBM and as a CEO, a position she never really thought about in her early career. 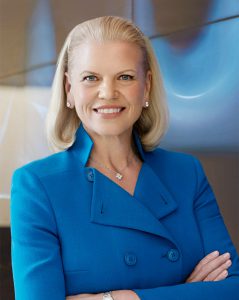 Ms Rometty joined IBM in 1981 and occupied various positions inside the company before being chosen as the CEO. She holds a Bachelor of Science degree with high honors in computer science and electrical engineering from Northwestern University. Ginni Rometty is recognized for a long-term strategic thinking and client focus. Over the last few years, she focused the company efforts on the cloud and cognitive computing systems, such as Watson (an AI platform targeted at professional, amongst which the most discussed, the doctors), for which she played an important role to commercialize it.
More information about Ginni Rometty nomination as IBM CEO here, the conference @ Stanford and the WEF Initiative “Shaping the future of Education, Gender and Work”.